Carsyn Currier joined KOLD News 13 as a morning reporter in August of 2021.

Carsyn is a mid-western girl from Peoria, Illinois, but is no stranger to Tucson. She graduated from the University of Arizona with a double major in Broadcast Journalism and Communication, and a minor in Film and Television in 2019. Prior to graduation, Carsyn spent her senior year working in the KOLD Newsroom, interning with the sports and news departments. She was also one of two students who received the Marshall School of Journalism’s Excellence in Broadcast Journalism award in 2019.

Following graduation, Carsyn got her start in TV news as a Multimedia Journalist in Southern Oregon at KTVL News 10 in Medford, Oregon. After filling in as the 11PM Weekday Anchor for five months, Carsyn was promoted to Weekend Anchor where she produced and solo anchored both the 6PM and 11PM weekend newscasts. Throughout her journey at KTVL, Carsyn covered three wildfire seasons, one presidential election, breaking news and a worldwide pandemic. Most notably, Carsyn was on the front lines of the 3,200 acre Almeda Fire in 2020 that burned down 2,000+ homes and made national news. 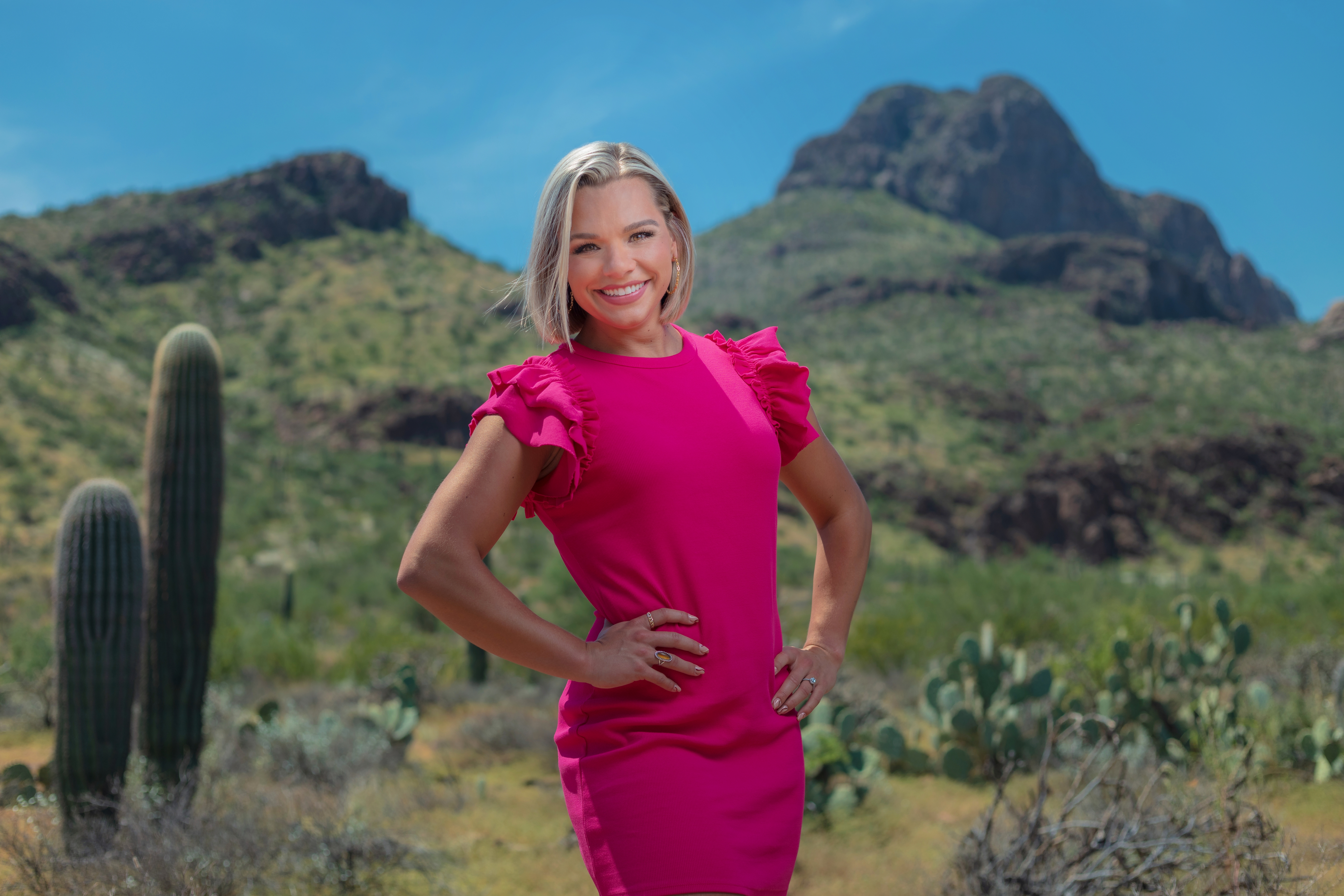 Carsyn cherished her time in Southern Oregon, but her heart ached to be back in Southern Arizona, where she feels most at home. When she is not reporting the news, you can find her and her fiancé, Anthony, hiking, enjoying delicious Mexican food and watching the Arizona Wildcats, Beardown! Anthony is a University of Arizona Football Alumni, so Arizona Stadium holds a huge place in their hearts!!

|
By Carsyn Currier
The medication is trending on social media after numerous celebrities have admitted they use it to lose weight.

|
By Carsyn Currier
A slew of dog attacks in Catalina have residents watching their backs, especially worried about their livestock.

|
By Carsyn Currier
Community members are speaking out after a 16-year-old girl died in a crash just days ago on Mary Ann Cleveland Way.

|
By Carsyn Currier
Light pollution or artificial light at night is rapidly reducing the number of stars you’re able to see when looking up into the night sky.

|
By Carsyn Currier
Longtime western movie actor, Ivan Wolverton, also known as “Red or Red Cloud” and his wife Margery are picking up the pieces of their lives, after a devastating house fire left them with nothing.

|
By Carsyn Currier
A new museum on the University of Arizona campus will highlight the contributions the African American community has made to Southern Arizona and the world.

|
By Carsyn Currier
A new law in Arizona is helping people get a second chance after they’ve been incarcerated.

|
By Carsyn Currier
If you are looking to buy or build a home in southern Arizona this new year, both realtors and builders say the process might look a little different.

Family of 18-year-old shot and killed in June are mourning, police asking for your help locating suspect

|
By Carsyn Currier
Family and friends of 18-year-old Nathan Callahan are grieving, and police are asking for your help identifying a suspect, after he was shot and killed at a pool party in June.

PACC having to euthanize dogs, Humane Society of Southern Arizona also dealing with capacity crisis ahead of the New Year

|
By Carsyn Currier
Animal shelters are at capacity across the southern Arizona and now Pima Animal Care Center has a Euthanasia list because of it.

|
By Carsyn Currier
Thousands of Ukrainian refugees fled to the United States this year in hopes of starting a new chapter in a new country.

|
By Carsyn Currier
Attorney General Mark Brnovich announced that the Arizona Attorney General’s Office has awarded $1,762,914 in grant funding to combat the effects of the opioid crisis.

|
By Carsyn Currier
Inside the renovated Old Chemistry building at the University of Arizona, you’ll find the holy grail of collaborative learning and research possibilities.

|
By Carsyn Currier
Women across the state are looking for a new doctor after Genesis OBGYN and Blue Cross Blue Shield of Arizona terminated their agreement Dec. 15.

Lifesaving drug could be available over the counter by late March, meeting big need in Tucson

|
By Carsyn Currier
A life saving medication could soon be available over the counter. Narcan or Naloxone is used to reverse the effects of an overdose, and the FDA just granted priority review for Emergent BioSolutions’ Nasal Spray.

|
By Carsyn Currier
ov. Doug Ducey is joining members of the Arizona Human Trafficking Council to raise awareness of human trafficking. A statewide multi-media campaign will now make that easier by providing resources to Arizonans in need.

|
By Carsyn Currier
Millions of people around the world are struggling with Long COVID. Thanks to a $7.3 million grant from the CDC, UArizona Health Sciences will now explore potential solutions for improving the health and well-being of people affected with long COVID across the state.

|
By Carsyn Currier
Friends, family and colleagues of Former southern Arizona Congressman, Jim Kolbe are mourning and remembering all the good he did throughout his lifetime.

Habitat for Humanity works to make dreams come true, providing houses to those in need this holiday season

|
By Carsyn Currier
Habitat for Humanity in southern Arizona is doing their part to give back this Giving Tuesday. The nonprofit spent the day building affordable homes for those in need.

|
By Carsyn Currier
Big plans are coming to Oro Valley Market Place after the Town Council approved zoning amendments for the more than $300 million soon to be Oro Valley Village Center.

Millions of drivers on the road ahead of Thanksgiving, despite traffic, gas prices

|
By Carsyn Currier
The LGBTQ+ Community in Tucson is speaking out following the deadly shootings at a gay nightclub in Colorado Springs over the weekend.

|
By Carsyn Currier
NASA’s Artemis 1 soared into space Wednesday morning, kicking off a near month-long journey around the moon and back.

NJCAA Men’s and Women’s Division II Soccer Championship in Tucson for the first time, bringing in millions for the city

|
By Carsyn Currier
Teams from across the country are in Tucson for the NJCAA Men’s and Women’s Division II Soccer Championships.

|
By Carsyn Currier
An engaged Tucson couple is asking for your help after a group of teenagers stole the bride-to-be’s wedding dress from their front porch.

|
By Carsyn Currier
According to the Tucson Police Officers Association, TPD has around 720 officers and it is losing around 30 officers every year.

|
By Carsyn Currier
As kids across the region dig through their candy bags on Halloween, homeowners say they still have a lot to spare thanks to just a few trick-or-treaters knocking at their doors.

|
By Carsyn Currier
Halloween is just days away and it’s getting a little spooky for one Tucson family after two men were caught on camera stealing their decorations.

|
By Carsyn Currier
Coaches, parents and athletes spoke out Tuesday, Oct. 25 at an Amphitheater School Board Meeting after six CDO football players were kicked off the team for attending a party where there was alcohol present.

How to prepare your pipes ahead of freezing temps

|
By Carsyn Currier
A freeze warning in effect for parts of southern Arizona overnight Monday, Oct. 24.

|
By Carsyn Currier
Arizona is getting millions in federal funding to install EV charging stations along Interstates 10 and 19, and community members had a chance to weigh-in at a public open house on Wednesday, Oct. 19.

|
By Carsyn Currier
It’s a warning to early voters in Cochise County after the County Recorders Office sent out the wrong ballots, affecting 11 precincts and 550 early voters.

|
By Carsyn Currier
Drug arrest on Dodge Boulevard leads police to bust at a home on the east side near Speedway Boulevard and Camino Seco.

|
By Carsyn Currier
kraine is dealing with the aftermath of another day of missile attacks, and power and water supplies have not been restored in many places, and in southern Arizona newcomers and refugees are feeling the burden.

|
By Carsyn Currier
Friends and family gathered Monday, Oct. 10 in honor of Elias Cordova, the man fatally shot during a fight outside a bar in downtown Tucson late, Friday, Oct. 7.

|
By Carsyn Currier
Students, colleagues and administrators at the University of Arizona gathered in front of Old Main Friday Oct. 7, for a Candlelight Vigil in honor of Professor and Hydrology Department head, Dr. Thomas Meixner.

|
By Carsyn Currier
The Marana Pumpkin Patch opens for the first time this season on Saturday, Oct. 1.

|
By Carsyn Currier
Residents invited to special block party to help transform the intersections of 14th Avenue and Helen and Mable streets.

TUSD upgrading preschool and childcare, thanks to more than $8 million in grant funding

|
By Carsyn Currier
It’s been about 20 years since some classrooms have gotten a complete upgrade.

|
By Carsyn Currier
Prizes will be given to winners and riders with the fastest circuits.

|
By Carsyn Currier
A new law going into effect on Saturday, Sept. 24, means people who haze others could face jail time.

‘Rainbow fentanyl’ on Tucson streets, police warn parents to be on lookout for drug that resembles candy

|
By Carsyn Currier
Tucson police Capt. John Leavitt said thousands of fentanyl pills are found on the streets daily, and about one of every 10 busts involve "rainbow fentanyl."

|
By Carsyn Currier
Instead of only having 12 to 15 NFL games to bet on weekly, players now have more than 450 matchups to choose from.

|
By Carsyn Currier
Sun Tran began waiving fares at the start of the pandemic in March of 2020.

TRAFFIC: Where to watch for road work across Tucson, southern Arizona

Seth Rogen offers chance to hang with him at his Airbnb

70 years ago, KOLD became first TV station to sign on in Tucson