Bud was inducted into the Arizona Broadcasters Hall of Fame in October 2009. He was also honored with an Edward R. Murrow Award in 2010, one of the most prestigious awards in journalism. In 2020, Bud won his first Emmy.

Bud was born in Lafayette, Indiana. He graduated from Ball State University where he earned a B.S. in business administration. His graduate studies brought him to Arizona, journalism at Arizona State and political science at the University of Arizona.

He has spent more than 40 years in the news industry in Arizona, having started in the studios of KAET at ASU in 1973. He quickly moved to NBC Channel 12 in Phoenix and at KOOL-TV, the Phoenix CBS affiliate. He came to Tucson in 1980 as an anchor for Channel 4. He moved to KOLD News 13 in 1994 as the anchor of the evening broadcasts. 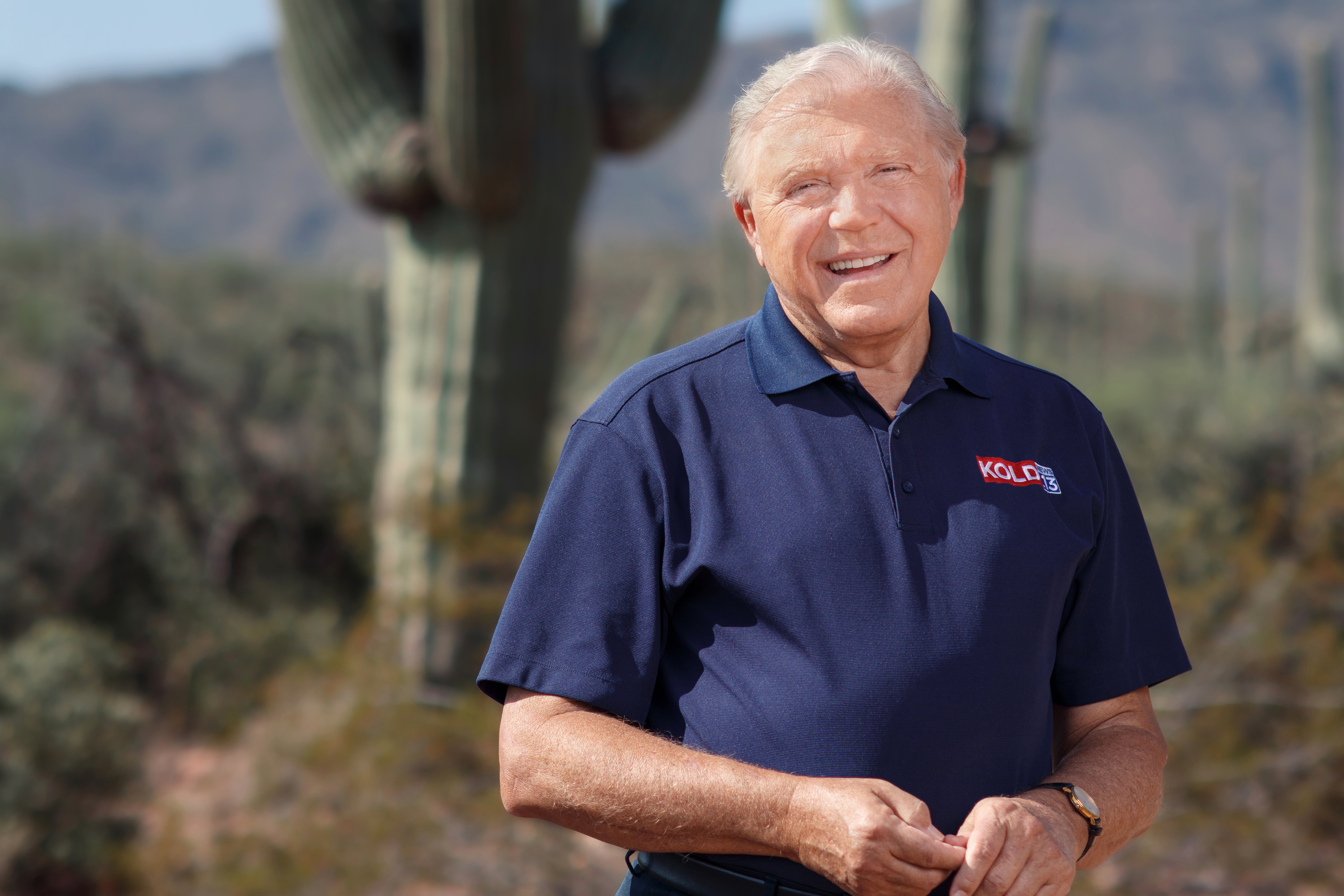 Bud has been nominated four times for an Emmy and won 30 other awards, including several Arizona Press Club Awards. He has been inducted into the prestigious Silver Circle by the National Academy of Television Arts and Sciences for his many years of contributions to the television industry.

Bud brings credibility, market experience and knowledge of the city to KOLD. He enjoys getting to meet new people every day and getting to wrestle with the issues of the city and surrounding communities.

Bud said "I think the most important thing is to give back to your community."

He devotes his off time to his wife, Maureen, their dogs, golf and scuba diving.

He has a daughter, Victoria, and two grandchildren.

70 years ago, KOLD became first TV station to sign on in Tucson

|
By Bud Foster
70 years ago, KOLD became the first TV station to broadcast in Tucson.

|
By Bud Foster
House Bill 2458 seeks to control what teachers can and cannot discuss in public schools.

|
By Bud Foster
What was supposed to be a non-partisan elections committee has gotten very partisan.

|
By Bud Foster
The clock is ticking for the state legislature to free up the money it approved for Arizona’s school districts.

Tucson is revamping its environmental portfolio with an eye for clean energy, reduced waste

|
By Bud Foster
The City of Tucson is in the middle of a total revamp of its environmental programs making the city an example of future energy sources, environmental rules and recycling.

City and County update their joint efforts to curtail homelessness

|
By Bud Foster
Tucson and Pima County have joined forces to try to end homelessness in our region and have invested a great deal of time and resources into the effort.

Planned Parenthood retools on 50th anniversary of the Roe v. Wade decision after its reversal

|
By Bud Foster
Planned Parenthood is using the 50th anniversary of the Roe v. Wade decision to retool after the abortion decision was overturned last June.

|
By Bud Foster
Tucson’s Ward 6 City Council member Steve Kozachik has fully embraced the idea that there’s just way too much plastic being dumped into the landfills and oceans, plastic which needs to be recycled not discarded. He believes he’s found the solution and wants to bring it to the Arizona desert.

How much will the Tucson rainstorms affect the current drought?

|
By Bud Foster
Whenever the skies open up and we get several days of rain, it will generally prompt the question: Is this drought relief? The short answer is no, not so much. Tucson is in the midst of a 27 year extreme drought, so a few days of light rain, while welcome, won’t help much.

Senior adults not getting vaccinated, lead in COVID deaths in Arizona

|
By Bud Foster
As the recent COVID-19 wave begins to recede, it’s becoming more apparent that the danger to seniors is not receding with it.

|
By Bud Foster
With all the water now pouring through California, it’s too bad it can’t be harnessed and utilized in an extreme drought. Some Californians, like the Sierra Club, are talking about new and expensive infrastructure to harness it, store it in big reservoirs and use as needed.

|
By Bud Foster
It was a different kind of state of the state address in Tucson today, different from what we’ve been hearing for the past 15 years or so, where they had been more business driven, this one today was more socially driven.

Two years after the Jan. 6 insurrection, there’s still many questions about accountability

|
By Bud Foster
Today is the second anniversary of the Capitol insurrection in Washington, D.C., an assault on the nation’s Capitol in an attempt of stop the certification of the 2020 Presidential election.

Border shipping containers are being removed from the Coronado National Forest

|
By Bud Foster
Nearly 1,000 shipping containers placed in the Coronado National Forest by former Arizona Governor Doug Ducey are being removed at a cost of $60 million to the Arizona taxpayer. That’s on top of the $90 million to place them in the sensitive desert in the first place.

|
By Bud Foster
As the drought continues to hammer Arizona and the Colorado River system, Tucson is trying to make plans for a water future into the 22nd century.

|
By Bud Foster
The remembrance service commemorating the tragic Tucson shooting on Jan. 8, 2011, has been canceled this year.

|
By Bud Foster
The “tripledemic” has landed with a thud in Arizona. In early October, with flu cases raging, RSV cases the highest in ten years and Covid cases on the rise, health officials predicted a banner year for respiratory diseases.

Lake avoids $700,000 in sanctions but still appeals her election loss

|
By Bud Foster
Just hours after a superior court judge ruled Kari Lake would not have to pay nearly $700,000 in sanctions for bringing a questionable lawsuit, she has filed an appeal in District 1 of the Arizona Court of Appeals and is asking for a review by the Arizona State Supreme Court.

|
By Bud Foster
Former Arizona Gubernatorial Candidate, Republican Kari Lake, could be facing hundreds of thousands of dollars in legal fees imposed on her by the courts for her lawsuit challenging the election results.

Container wall construction stopped, but who pays for $100 mil cleanup?

|
By Bud Foster
Now that the National Forest Service and Arizona Governor Doug Ducey have reached an agreement to remove the three miles of shipping containers the Governor has erected in the Coronado National Forest, the questions are beginning to swirl about how to get them out of there and who pays for it.

Judge to decide whether to overturn 2022 election

|
By Bud Foster
A decision which could have a profound impact on the Arizona Governor’s race is in the hands of a Maricopa County judge tonight.

|
By Bud Foster
The Pima County Board of Supervisors voted 4-1 in favor of leasing a 63,000 square foot big box store at Drexel and Interstate 19 to house an overflow of migrants and asylum seekers expected to flood the county when Title 42 is lifted.

With the end of Title 42, Pima County scrambles to house an expected surge in asylum seekers

|
By Bud Foster
When Title 42 is lifted next week, local officials have been told the number of asylum seekers and migrants coming to Tucson will surge.

|
By Bud Foster
It’s believed after several delays, that the border policy Title 42 will end Dec. 21. Title 42 is not an immigration policy, it’s a CDC pandemic health policy which prohibits asylum seekers from entering the US.

Some positive news as Pima County’s “tripledemic” rages on

|
By Bud Foster
The “tripledemic” is still doing a job on Arizona, although according to the Pima County Health Department, there are some bright spots.

|
By Bud Foster
Finally, after nearly a century of efforts, science may discovered how to produce fusion which can be used to generate energy to heat out homes and provide electricity with no greenhouse gas emissions.

|
By Bud Foster
The Emergency Rental Assistance Program, which has helped 20,000 Pima County residents stay in their homes since the pandemic and has saved countless landlords from going bankrupt, is running out of money.

Can Sinema win reelection as an independent in Arizona

|
By Bud Foster
When Arizona Senator Kyrsten Sinema announced on a CNN interview that she was leaving the Democratic Party and reregistering as an Independent she had this to say.

Corrections officers may get an early Christmas gift from Pima County

|
By Bud Foster
Pima County’s jail is 40 years old and it’s falling apart. Not only that, but it’s overcrowded, even after nearly four years of trying to reduce its inmate population.

|
By Bud Foster
Cochise County has ended its stalemate with the state over the 2022 election certification by voting 2-0 to the canvass the election as required by state law. Supervisor Tom Crosby failed to show up for the vote.

|
By Bud Foster
Pima County officials are concerned about being overwhelmed if the Title 42 is lifted as it is scheduled to be Dec. 21.

|
By Bud Foster
Facing two civil lawsuits and a possible criminal investigation, the Cochise County Board of Supervisors remained defiant, hiring outside legal counsel rather than certify their 2022 election results as required by law.

COVID-19 rebounds in Pima County with a vengeance

|
By Bud Foster
A spike in COVID cases was predicted when the temperatures began to drop, and people spent more time indoors.

|
By Bud Foster
Both Cochise and Mojave counties, both Republican strongholds, have thrown the Arizona election process in doubt.

|
By Bud Foster
The “tripledemic” is in full swing in Pima County. Three respiratory diseases have converged, not just in Pima County, but statewide.

Water restrictions coming to Tucson “sooner rather than later”

|
By Bud Foster
As the Colorado River continues to deplete, cities, towns and states are looking for ways to conserve without being too harsh.

Kari Lake has not conceded and suggests a legal challenge

|
By Bud Foster
A U.S. District Court judge in Washington has declared an end to Title 42, a Trump era policy which kept asylum seekers and migrants out of the country to protect against the spread of COVID-19. But now that COVID is no longer considered a health emergency, Judge Emmet G. Sullivan, has ruled the policy is “arbitrary and capricious”.

Why Kari Lake lost the race for Arizona governor

|
By Bud Foster
The 2020 midterm results were not what most people predicted. In a typical off year election, the President’s party usually takes a shellacking.

|
By Bud Foster
Valerie Colonge was choking back tears as she read a letter to a Pima Superior Court judge who was about to sentence the man who killed her daughter, 13-year-old Maribel Gonzalez back in 2014 to prison for the rest of his natural born life.

Arizona facing a “tripledemic” of respiratory illnesses as weather cools

|
By Bud Foster
It’s a very bad year, at least so far, for respiratory diseases.

|
By Bud Foster
“There is some uncertainly on how the legislature is going to look at this point,” said Doug Cole, the COO of AZ Highground, Inc., a political consulting firm in Phoenix.

Midterm election too close to call, but some hints could determine winners

|
By Bud Foster
Generally, in a midterm election in Arizona, picking winners and losers is fairly simple. The Republicans hold a structural advantage, an advantage in registration and an advantage in enthusiasm.

Concern over political violence hangs over the 2020 midterm election

|
By Bud Foster
If the aftermath of the 2020 election is any indication, then the prospect of some violence before, during or after this election cycle is very real.

Political polls just snapshot in time, not prediction on who will win

|
By Bud Foster
Polling has come under criticism in recent years as it has become less accurate, especially for midterm elections.

|
By Bud Foster
Independent voters are expected to make a huge impact on the mid-term election.

TRAFFIC: Where to watch for road work across Tucson, southern Arizona

Seth Rogen offers chance to hang with him at his Airbnb